If you are trying to find out how to lock a push bar door, you’re at the right place. In this blog post, we’re going to be taking a detailed look at what push bar doors actually are, how they work and how you can lock them.

We wouldn’t have needed to include so much stuff just to explain how you can lock them. But, in order to understand it, you need to have a proper idea about these types of doors and the way they function.

Once you are done reading this post, you will know how to lock a push bar door from the outside, how to keep it constantly unlatched and so on.

What are Push Bar Doors?

To understand how to lock a push bar door, let’s start off by looking at what it actually is and how it is different from other types of doors.

Push bar doors are also known as “panic bar” and “crash bar” doors. These types of doors are usually found in places such as schools, hospitals and other venues that have to hold a large number of people at once.

These doors are characterized by their unique locking/unlocking mechanism. Instead of the standard knob or handle that is usually found on most doors, push bars have a thick horizontal piece of metal/plastic i.e., a “bar” that is placed approximately at half the height of the door.

To open these doors, all you have to do is apply pressure on the bar. On being pressed, the bar goes in (or down…in some designs) and the latch is retracted, which releases the door itself.

Why are Push Bar Door Used?

The other names of these doors i.e. “panic bar” and “crash bar” are somewhat self-explanatory on why they are used, especially in public venues like hospitals and schools. 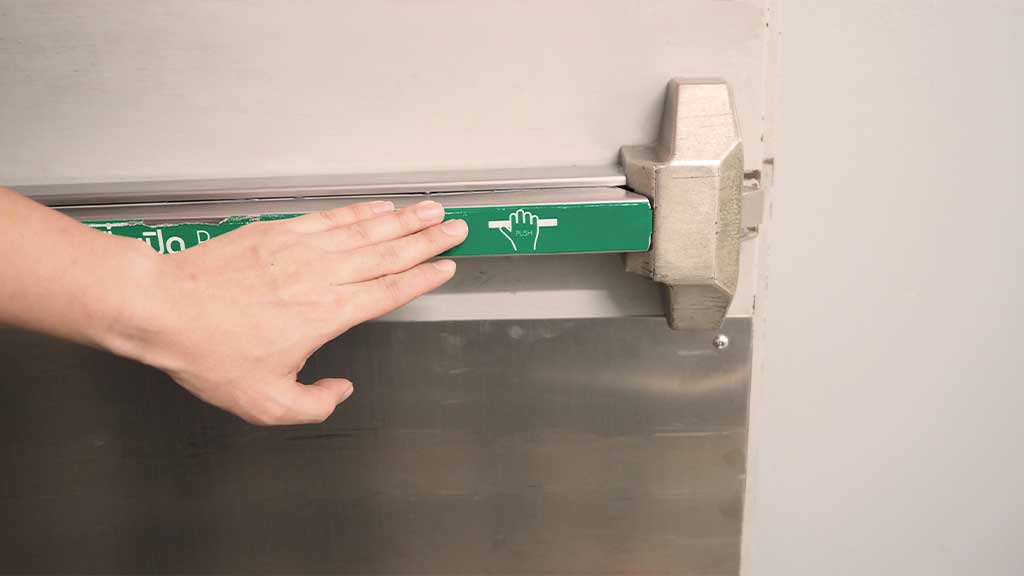 These doors are a security measure for emergencies. In the event of an emergency, due to which crowds of people have to evacuate the building, push bar doors can be easily unlocked from the inside. To unlock push bar door models, no prior knowledge about the mechanism is required.

If the panicking crowd of people is left to fiddle with a knob or a handle in the midst of an emergency, it can lead to tragedies like stampedes, suffocation etc.

One possible logic that we can appreciate when it comes to panic bar doors is that even if no one actively tries to unlock it, it will still get opened at a body shove or an accidental collision. In other words, if there is an emergency where people cannot see the door for some reason (due to a power outage etc.), there is still a good chance that it will get opened at an involuntary push or shove. All it needs is horizontal pressure on the panic bar handle.

Push bar doors started getting used when there were different accidents in which a lot of deaths occurred due to the inability of the victims to get out of the building they were trapped in. The victims were unable to quickly evacuate the building due to the doors being locked using standard keys.

In order to provide a solution to this problem, push bar doors were introduced. These doors could be locked securely from the outside in order to prevent intruders from entering. But, from the inside, all they needed was a push on the bar in order to be opened. Due to this push door lock mechanism, such doors have gained considerable popularity nowadays and are used even in places such as office buildings. 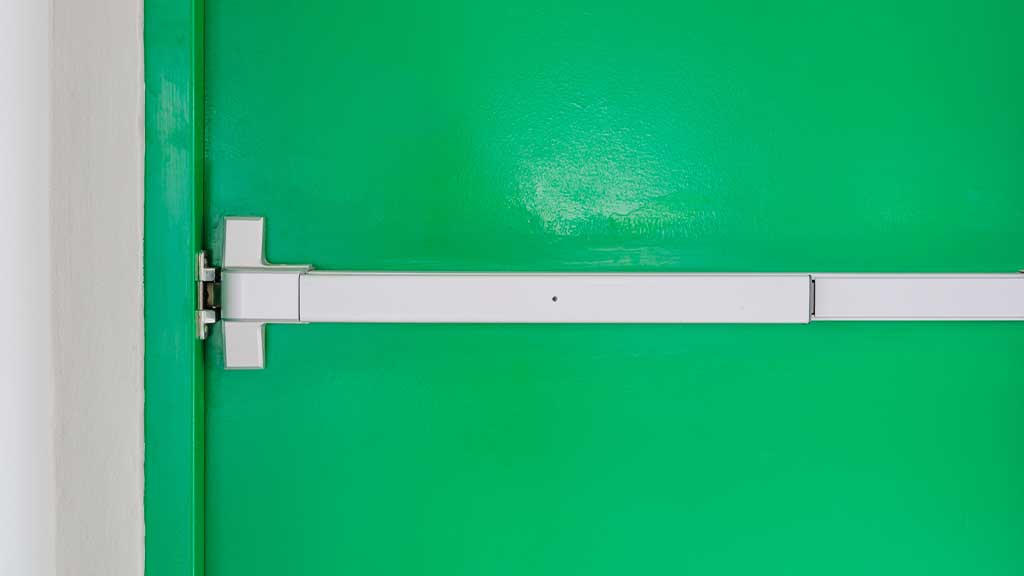 This could also be the reason that you’re trying to figure out how to lock a push bar door. They’re great for main entrances and other places that have to be frequently accessed by a lot of people.

How do Push Bar Doors Work?

By now, it’s probably clear how these doors work, but let’s go through it again properly one time before moving on. This will help you get a better idea of how to lock a push bar door.

A push bar door can be opened relatively easily from the inside as compared to the outside. If the door has been latched, then it can be opened from the outside only with the help of a key. In public buildings where the doors have to be continuously opened and closed by visitors and workers, the push bar is permanently set in the “pressed” position. This allows everyone to go in and out easily.

How to Lock a Push Bar Door?

Now, let’s come to the point at hand i.e., how to lock a push bar door. 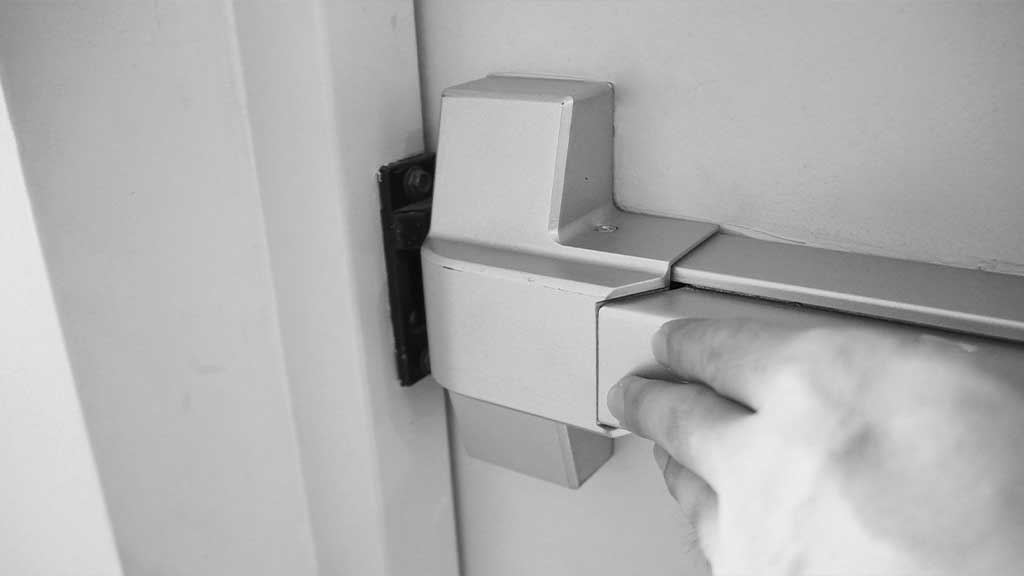 In the “pressed” position, the latch will stay retracted and the door will not lock every time it is closed. It will be easily opened by anyone on both: the outer and inner sides of the door.

On the other hand, if you use the Allen key and rotate it to the original position, the bar will spring back into its normal place. In the normal position, the door can only be unlocked once pressure is applied to the bar from the inside. A person from the outside will not be able to simply open the door. Rather, they will have to use the push bar door lock key.

And this is, in a nutshell, all there is to the question of “how to lock a push bar door”.

Locking a Push Bar Door from the Outside

In the section above, we just learned that you can lock a push bar from the inside in such a way that it cannot be opened by a person coming in from the outside.

But, that does not mean that it is entirely impossible for you to lock a push bar door if you don’t happen to be inside the building. A simple solution for this is to install a deadbolt on the push bar door above or below the panic bar itself. That way, you will be able to unlock a push bar door from the outside using a normal key.

Using a Deadbolt on a Push Bar Door

The benefit of using a deadbolt (as explained above) is that you can lock crash bar door without key i.e., the hexagonal Allen key. Even if you don’t have one at hand, you can still secure the door to prevent people from entering while keeping the bar in the “pressed” position.

Yes, a panic door can be locked either by the mechanism of the door push bar itself or by installing an additional deadbolt. The mechanism of the push bar, as we explained above, locks the door in such a way that it is unopenable by people from the outside. On the other hand, if you install a deadbolt, then you can simply turn the key to lock the door and turn it back to unlock it.

Door knobs usually have a push button on them that can be pressed in. After pressing the button, the doorknob gets locked and a person from the outside won’t be able to turn it.

A panic door bar can simply be unlocked by applying pressure horizontally on it. On the other hand, if you want to unlock the door bar i.e., to release it from the “pressed” position, you can use an Allen key. The method for this is explained in the post above.

A push bar door can be opened by giving the panic bar a horizontal press. On applying pressure, the bar goes inwards and the door gets unlatched.

5.  How Do You Fix a Push Button Door That Won’t Lock?

If you are pressing the button on the knob but the door is still coming out from the frame on being pulled/pushed, then there could be an issue with the strike plate. The strike plate is a small piece of metal installed on the door frame that holds the latch when the door is closed.

Check the strike plate to see if it is lining up properly with the latch. If it is not, then you will have to adjust it to correct the alignment. This should solve the issue of the door not locking.